Committed to the Stewardship of Our SoCal Fishery

On the Water Report: Use of the SeaQualizer Release Tool

On a recent rockcod trip OSA members gave the thumbs up to the SeaQualizer descender tool. Our clubs chartmaster bags now contain 3 Seaqualizers and a gangion that can be used on the designated Barotrauma Release Pole.
A three station gangion was configured using Nylon Braided Twine, with four 500lb snap swivels to attach the SeaQualizer units and the sinker. It should noted the Seaqualizer unit comes with a compression snap that just didn't quite work to our benefit, thus the snap swivels were attached with 24" spacing. Some of the fish released were quite large. The descender sinker needed to be increased to overcome the buoyancy of the fish. Five pounds seemed to do the trick. With small fish, it is possible to double up on each tool, thus releasing 6 fish at one time.
After a few demonstrations on how to properly load the fish and descend, members of the club actively helped. The crew also jumped in and it wasn't long before we had a streamlined process in place.  Overall, the tools worked great and loading - descending was very easy.

The Great News: We released over 100 undersized fish or species with filled quotas.

On our 2nd Rockcod trip to SCI, our OSA anglers eagerly supported the release of over another 100 undersized or species with filled quotas.

As a club in just 2 rockcod trips we have released over 200 fish. Great job guys and gals....Your leading by example.

2016 Update: Our club has adopted the tools, the processes and we consistently release many undersized or at the limit rockfish on every RC trip. No doubt over the last 3 years we have released thousands of Rockfish, several Black Seabass and a number of huge cow Cod. Our club is committed to the concepts and principles of supporting a sustainable fishery.

Facts from Monterey Bay Aquairium
Egg production differs with each species, and canary rockfish can produce as many as 1,000,000 eggs at one time. Fertilization is internal for all rockfishes, and the females supply nutrients internally to the developing larvae. Four to five weeks after fertilization, females give birth to larvae about the size of an eyelash. 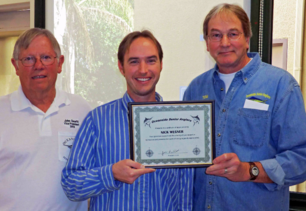 Nick Wegner, NOAA Fisheries Biologist with OSA President John Dewitt and VP & Conservation Chair Bo Bolender. Nick educated our club on his field studies of catch and release techniques of rock fish. His studies have proven releasing rockfish at depths deeper than 50 fathoms is possible and has a high survivor rate.

The intent of our policy is to state a principle and position for the club. The club does not intend to try and enforce this policy, this is not our business. As in most areas, ultimately it is up to the individual to do what is right.
Members can assist by speaking up when you see a member or guest causing a conservation concern. The person may not know there is a problem. If they do know they may not know how to resolve the problem. Set good examples and show other members how to improve conservation compliance by practicing good conservation ourselves. Do it yourself and don’t rely on the deckhand to safely release your fish. If he has time and is willing to help that is great, but each member is expected to be capable of safely releasing his or her own fish. Practice recycling of old fishing line on and off the ocean. Respect the ocean by not throwing trash or other non-biodegradable materials into the ocean.

Please feel free to ask questions and if you know the conservation requirement but don’t know how to achieve it then please ask for help. As a club, we can help contribute to conservation efforts, protect our environment and enhance our fisheries.

On our OSA Wounded Warrior trip of yesterday, July 2, 2014

Our Wounded Warriors did it again this year. Yes, they caught a tagged Calico off of La Jolla while on our last WW trip of the year. A call has been placed to NOAA about the tag. As of Sept 9, I have not heard from the NOAA Lab. Will keep you posted on the details of when the fish was tagged and by who (What tagging trip)​

How Old is That Calico Bass?
Chart Courtesy, Milton Loves "Certainly More Than You Want to Know About The Fishes of the Pacific Coast. 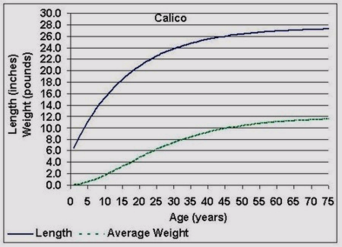 As an angler, are you aware Kelp Bass (Paralabrax clathratus), also referred to as Calico Bass, Grow So Slow? We have all been told that our heroes of the kelp are slow growers, but this chart hits home with a visual Length, Weight vs Age.

Remember, Practice CPR. Catch - Photograph - Release. Our club presents handsome pins to those who release breeder bass. You can help.

With the help of Berkley, we turn used mono into fresh water fish condos. Releasing Tuna While Still in the Water

Pelagic Prototype Release Tool Tested
The clubs first pelagic release tool was successfully tested on a recent 2.5 day trip. 14 YFT and 1 Skippy were released without being pulled from the water. This is the first time the tool has been tested on commercial sport boat with free boards greater than 4 ft.
​​

OSA Yellowtail Tagging Project Supports UCSD Phd Studies
After the successful calico bass tagging trip, we contacted NOAA-Scripps with the idea of expanding to another fishery. I was introduced to a Scripps Phd student, Noah Ben-Aderet who was conducting a Yellowtail science project, which included tagging inshore yellowtail to study their migration habits.

Noah was introduced to the OSA board and gave his overview of  tagging experience on the New Lo Ann, based out of Point Loma Sport Fishing. The board approved his process and he was invited to join a October OSA club charter and we would try our best to tag some offshore YT.

The club contacted Promar nets and explained what we were up to to and how we thought a net would aid in bringing the fish on board to be measured and tagged. Promar graciously donated a large rubbed coated net for our use.

We have just completed the charter and we were able to tag several very large YT (47" in length) and few smaller models. The net worked perfectly and the stress to the fish was reduced substantially.

What a great research project. Science and Fishing...Fantastic Stuff.

The scientific approach for this tagging operation was to locate, catch, tag, and release cow cod and rock cod species of fish.  Within this platform, the criteria of importance was to catalog, monitor, tag, and record…… the location and dept the fish were found/caught, species and quantity caught of each, look for previous tags,  type of descender used, approximate time required to catalog information and then release.  We used five (5) different descender mechanisms (1) Sheldon, (2) Black Tip, (3) Roklees, (4) Sea Qualizer, and (5) Milk crate.  After the operation was over, we were given Forms for each of us to evaluate and provide our opinions of the descenders used.

NOAA will not place Pacific Bluefin on Endangered Species List